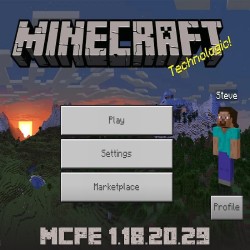 Minecraft PE 1.18.20.29 APK is released for android and working Xbox Live: In this Version, you can get frog light and sculk blocks, catch tadpoles, and appreciate the improved frog animation!

The Minecraft developers continue to refine the game world. The released update of Minecraft PE 1.18.20.29 introduces players to new mobs. It opens up additional features and access to unique blocks, improving the gameplay. And many new things are added.

Amphibians still inhabit the swamp biomes of Minecraft 1.18.20.29 Version. The animation of all mobs has changed and the Quality improved several times.

In addition to frogs, there are many tadpoles in the swamps. They swim only in water because they cannot be on land.

Unique glowing blocks of frog light appeared in Minecraft PE 1.18.20.29 version in three shades: pearl, ochre, and green. In this update there are also valuable blocks of the game, sculk blocks, etc. They emit light and have several varieties.